Backxwash completes a trilogy on His Happiness Shall Come First 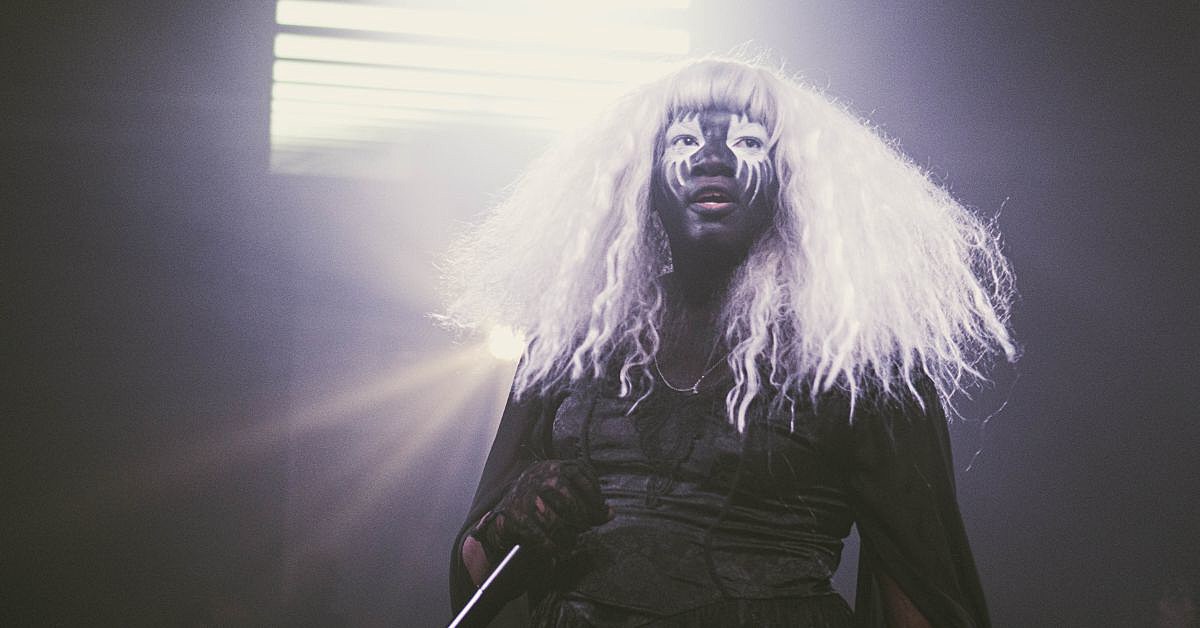 An artist should never let an opportunity to release a new album on Halloween go to waste. When the timing of finishing up the writing and recording of Backxwash’s fourth album just happened to line up perfectly for a drop on All Hallow’s Eve, she couldn’t resist the chance to do so. On Oct. 31, the industrial-rap artist shared her third album in three years, His Happiness Shall Come First Even Though We Are Suffering. And though the Montreal-based producer and emcee, whose real name is Ashanti Mutinta, admits that Halloween is “kinda goofy,” it’s the time of year when her intense, haunted music feels most alive.

Drawing on imagery from horror films — her new album’s title is paraphrased from a line in the 2018 Philippine horror film, Eerie — as well as musical inspirations that include both Danny Brown and Godflesh, Backxwash makes music that’s harrowing and visceral. On 2021’s I Lie Here Buried With My Rings and My Dresses as well as its predecessor — the previous year’s Polaris Prize-winning God Has Nothing To Do With This Leave Him Out of It — Mutinta uses her powerful sonic presence and dark imagery to address everything from personal struggles and religious hypocrisy to her own experiences being Black and transgender in a society perpetually in the grips of the white patriarchy.

His Happiness, Mutinta explains via Zoom from her home in Montreal, is the final piece of a trilogy with those two albums, one that draws from her personal experiences as a child and a teenager in Zambia.

“God Has Nothing to Do With This is me in the present, and I Will Lie Here With My Rings and Dresses is me in my young adult days,” Mutina says. “His Happiness is going back into the past when I was growing up.”

Composed of 10 songs each given a one-word title in Nyanja, the language she grew up speaking in Zambia, His Happiness examines her experiences in a conservative religious environment, as well as coping with personal trauma and overcoming the fear and judgment that comes with all of it. This isn’t spooky-scary but the kind of stuff that can actually keep you up at night — suicidal thoughts, the throes of addiction and the looming threat of the wrath of a vengeful God. From a thematic standpoint, it’s as heavy as music gets.

Sonically, it’s equally immense. The gothic grandeur of first song “VIBANDA” (“Spirits”) features an eerie choral sample of “Lacrimosa” from Mozart’s Requiem, while “KUMOTO” (“Hell”) creeps by with an oozing, distorted, ominous loop. “NYAMA” (“Demon”) includes guitar and vocals from one of only a few guests on the album, Kate Davies of U.K. mathcore group Pupil Slicer, as Mutinta weaves a menacing narrative of paranoia and violence. As abrasive and caustic as this material is, there’s often a subtler approach to be found here as well, with finer details emerging through the distortion and haze, which Mutinta says is a product of her own process of growth and evolution as a producer.

“With every album that comes out, I’m also learning something new from a production standpoint,” she says. “So with God Has Nothing To Do With This, I was pretty comfortable with my sampling work, so [I decided], let’s go into layering the samples. Because the sample work was pretty loud, but compared to the instrumentals on I Lie Here and His Happiness, it feels a little bit thin. So with I Lie Here I was learning layering, and with His Happiness, getting more comfortable with melodies. The strive for learning more is what’s kept me going.”

As Mutinta has cultivated her craft as a producer over the past few years, she’s increasingly reluctant to hand over the production reins to another artist — her Twitter bio reads “Rap Queen Not Accepting Beats ty”. There are occasionally exceptions to the rule, like 2021’s “Blood in the Water” and “Nine Hells,” produced by noise-rap outfit clipping and metalcore group Code Orange, respectively. But by and large, she’s the only one who truly understands the sound of Backxwash, she says.

While much of His Happiness can be a white-knuckle ride, even amid the depths of the soul that she plumbs, Backxwash doesn’t do so without offering some form of hope as well. “MUKAZI” (“Woman”) is a considerably warmer ending to it all. Mutinta acknowledges her own growth and survival while reflecting on her own struggles with depression and suicidal feelings against a surprisingly bright and soulful production. While the musician acknowledges that revisiting these parts of her life can be draining, it’s been a cathartic process for her to do so.

“For me, it’s a way to close the book on a lot of things, a lot of demons that live with you,” she says. “It really takes a lot, going back into these spaces, and writing from that perspective. I think I feel better after I put it on wax. Not to sound cheesy, but it’s therapeutic in that sense.”

The pace at which Mutinta has been moving over the past few years, let alone the intensity of the material she’s created, has led her to acknowledge that it might be time to give herself a break from creating. In the coming year, she plans to perform material from this album and its two predecessors live, and when she’s ready to step back into her role as a producer, she says, she might experiment with entirely different styles on the next record she makes. But for now, she’s faced with another rare opportunity: She’s able to take a step back and reflect on what she’s accomplished.

“The writing is such a cathartic process because you’re putting yourself in a place where you haven’t gone in a while, and that takes a lot,” she says. “When I wrote the last song, I thought, ‘OK, I need to take a break.’ I’ve been constantly putting out music that puts me in a very weird place, without looking outward and saying, ‘Oh yeah, you know, I did win that Polaris thing in 2020.’ I think I just want to spend the next year taking it all in.”

Music like Backxwash’s can take a lot out of a person, but the end result after such an intense process is feeling much closer to being whole.

2022-11-18
Previous Post: L.S. Dunes were a lifeline during the pandemic for five friends
Next Post: PinkPantheress, Fousheé and more are our tracks of the week