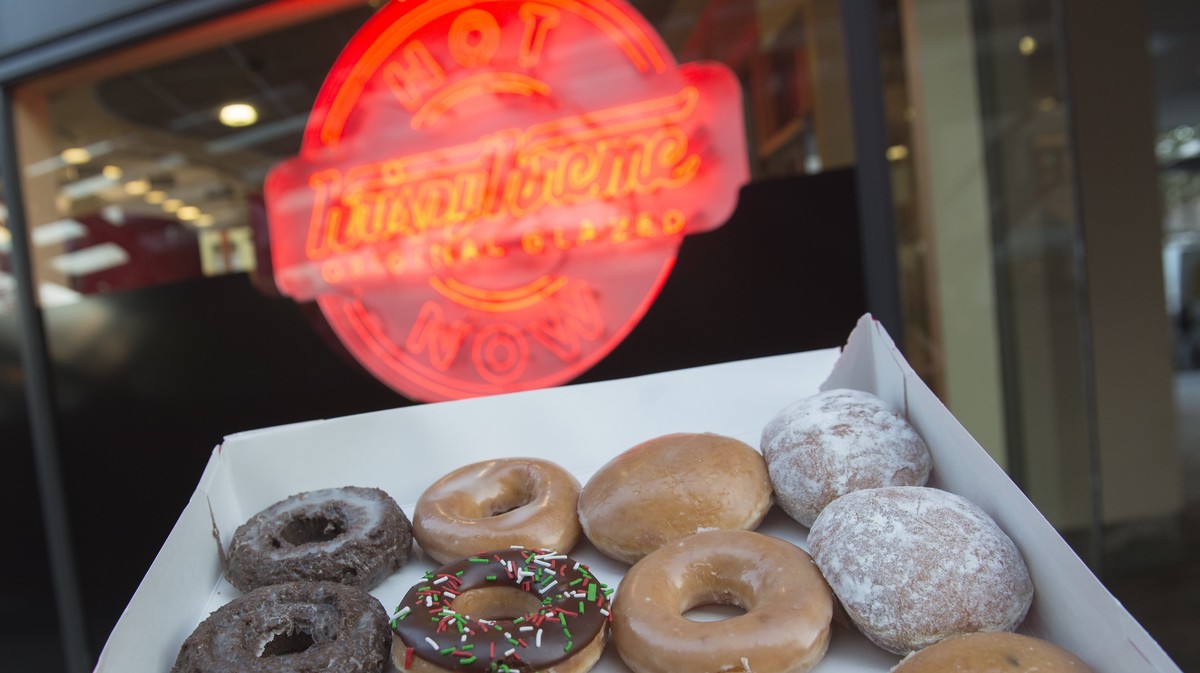 It was just after 10:30 a.m. on Monday when I rolled up to Krispy Kreme and parked right beside its glowing neon ‘HOT NOW’ sign. The staffer behind the register said I was the first person to flash my COVID-19 vaccination card to score a free doughnut—but the promotion was just a couple of hours old at the time. “Everyone else will find out,” she told me, sliding an Original Glazed into a waxed bag. “And they’ll keep coming for free doughnuts until [the company] tells us to stop.”

Early yesterday morning, Krispy Kreme announced that it would give one free OG-doughnut to anyone who shows their vax-card inside its stores or at the drive-thru window through the end of the year—and this isn’t a one-day-only deal either. If you’ve been vaccinated, and want to collect 283 free daily doughnuts between now and the time you throw your 2021 calendar in the trash, then you can do that too.

“We all want to get COVID-19 behind us as fast as possible and we want to support everyone doing their part to make the country safe by getting vaccinated as soon as the vaccine is available to them,” Krispy Kreme Chief Marketing Officer Dave Skena said in a statement.

But because we live in history’s dumbest era, putting the words COVID-19, safe, and vaccine in the same sentence is enough to cause controversy. That pandemic-related promotion has already been roundly criticized by vocal anti-vaxxers, Twitter users with a half-dozen American flag emojis in their bios, and people who constantly quote the Constitution and George Orwell, despite never reading either one. (The Venn diagram showing the overlap of those people looks a lot like what you’d order at Krispy Kreme.)

As of this writing, there are more than 10,000 comments on Krispy Kreme’s Facebook post about the voluntary promotion for customers who voluntarily show their vaccination card in order to voluntarily receive a free doughnut. There are also hundreds of negative responses that promote misinformation about the available vaccines, suggest that Krispy Kreme is discriminating against those who don’t want to be vaccinated (they’re not—more on that in a sec), or equate free doughnuts with Biblical prophecies. Here’s a representative sample:

— “Looks like you are part of indoctrination [sic] of American citizens. If we’re good and follow along we get presents. Soon we can get all kinds of free stuff if we go along with getting micro-chipped too, is that how it’s going to work?”

— “Wow KK, I didn’t know you were discriminating against people who feel it’s their body, their choice to not get a rushed experimental shot from the government!? That’s like saying if you are straight you get a free donut!”

—“Hey I took my vitamin C and Zinc as preventative. Do I get a free donut for doing my part as well?”

—“Would you like the unvaccinated to wear a yellow star on their chest? Since you’ve decided to stray into an area that has nothing to do with your actual business I’d like to know how far you’re willing to go.”

—“What about those of us w natural immunity?”

—“We are getting close to the end times, when there will be no buying or selling unless you ‘have the mark [of the Beast].”

Dr. Julie Graves, a public health and family medicine physician from Miami, Florida, isn’t surprised by this almost-immediate backlash to the offer. “Of course the anti-vaxxers are trolling this,” she told VICE. “That’s what they do. They use their influence, especially online, to convince people not to do what is healthy and appropriate. The anti-vaxxers are great at social media, but they lie.”

Graves, a “strong advocate” for vaccinations, has received both doses of the Moderna vaccine. She also thinks that giving small perks to those who get their jabs could be a good idea on a couple of levels. “People want to know what the prevailing community beliefs are. Having a company reward getting vaccinated is delightful—as are the donuts [in this case],” she said. “Yes, we are that malleable, and rewards motivate very effectively.”

Offering a free doughnut—or even 283 free doughnuts—might not be enough to motivate someone to get vaccinated if they hadn’t previously considered it, but Graves says that it might “tip the scales” if someone is wavering. “They see that getting vaccinated is accepted by the wider community,” she said. “As for other ways to reach people who aren’t sure, they usually listen to personal influences: family, friends, media personalities and, sadly, online hoaxers.”

Anyone who lives within glazing distance of a Krispy Kreme store knows that this isn’t a new thing for them, at all. The North Carolina-based chain gives away doughnuts for dozens of reasons during any given year: they give them to kids who get an A on their report cards; to teachers and school administrators during Educator Appreciation Week; to adults and kids who dress up for Halloween; to babies born on the last Leap Day; and to people who talk like fucking pirates in public.

But, perhaps realizing that anti-vaxxers would wreck their Conspiracy of the Day underpants if they didn’t get their own deal, Krispy Kreme preemptively addressed vaccine hesitancy in its FAQ about the free doughnut offer.

“We understand that choosing to receive the COVID-19 vaccine is a highly personal decision,” it wrote. “If you have made the personal decision to not receive the COVID vaccine, please visit us on Mondays, 3/29/21 – 5/24/21, to receive a free Original Glazed doughnut and a medium brewed coffee to get your week off to a good start.” (See, Facebook commenters? You don’t need the Mark of the Beast to get free snacks. AT LEAST NOT YET.)

That part of the offer didn’t impress Elaine Fogel, a Scottsdale, Arizona branding and marketing consultant. “The fact that Krispy Kreme is playing both sides of the issue demonstrates a lack of vision and consistency,” she said. “Is the company for or against vaccination? Taking a stand means sticking to one side. This effort is disingenuous and appears to be a PR stunt no matter what its original intentions were.”

Whether or not other companies will be put off by the backlash that Krispy Kreme has faced—or whether they’ll also feel obligated to ‘both sides’ it—is something that they’ll undoubtedly discuss in their next marketing meetings. Dave Skena told the Wall Street Journal that he hopes that other brands will choose to run with the idea. “Marketers like me have the opportunity to do something to reach a broader audience in a way that is maybe somewhat commercial but also is just a good thing to do,” he said. “This is one of those situations where we’d love to be copied over and over again.”

There haven’t been many other big name vaccination perks, at least not yet. Mint Dispensary, an Arizona weed dispensary chain, will give one free edible to anyone who’s been vaccinated. And office supply retailer Staples has offered to laminate everyone’s vaccination cards for free until April 3. Somehow, the anti-vaxxers will find a way to get mad about that too.

2021-03-23
Previous Post: Mannequin Pussy Announce Upcoming Perfect EP, Release New Song, ‘Control’
Next Post: ‘It Was Their Childhood’: Looking Back on 30 Years of Clarissa Explains It All