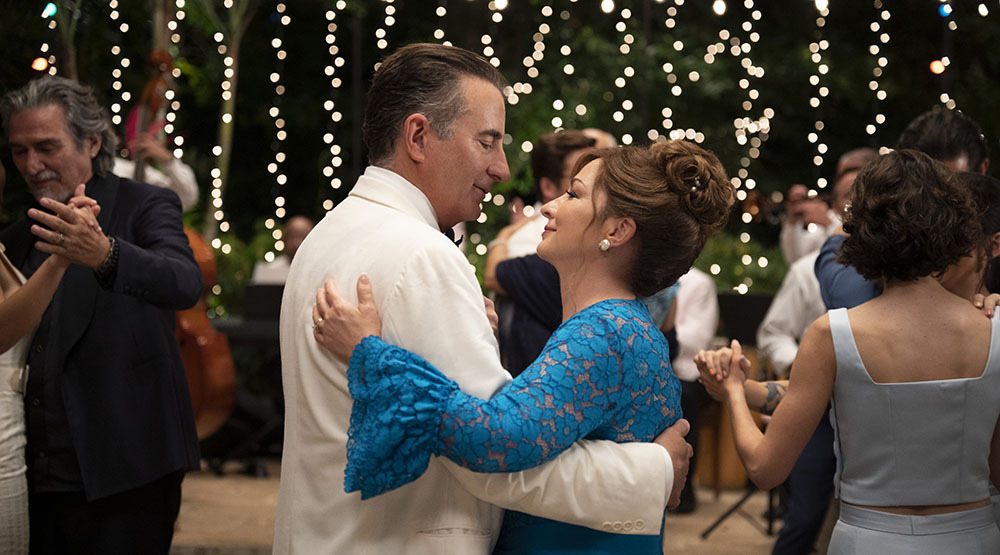 Billy Herrera, a successful architect and the title character of the newest iteration of Father of the Bride, is played with terrific comic understatement by Andy Garcia. He has some of the gruffness of Spencer Tracy in the hit 1950 movie of the same name — the first screen translation of Edward Streeter’s novel — and none of the mugging that Steve Martin brought to the 1991 remake. But like both their characters, and pretty much every dad in every American comedy ever made, Billy needs enlightening about the way things are in the world today. When he says, “I came to this country with nothing,” which he does every chance he gets, his wife and daughters roll their eyes and wait for the moment of self-mythologizing grandeur to pass.

The shocking reality that kick-starts his awakening is news that his older daughter is getting married; further astonishments revolve around the planning of the wedding. Whatever you think of the premise of Streeter’s novel, clearly it’s enduring enough to prompt a starry screen adaptation every 30 or 40 years. So here comes the bride again, this time with Latin pizazz and a welcome twist on the premise.

Father of the Bride

The Bottom Line Ties the familiar knot with a welcome twist.

Screenwriter: Matt Lopez; based on the novel by Edward Streeter

As with its predecessors (each of which received sequel treatment), the HBO Max film is the gentlest of satires, a reassuring portrait of an ultra-bridgeable generation gap and a bland ribbing of the pomp and circumstance required to maintain membership in the upper middle class. Setbacks and conflicts notwithstanding, we know where the hijinks are headed, and the stakes never feel high — did we ever really care whether the nuptials went off without a hitch, even when the bride-to-be was Elizabeth Taylor?

But screenwriter Matt Lopez (Promised Land) tweaks the premise to give the father’s POV more emotional weight than standard-issue concerns about the cost of floral arrangements and the ache over losing his little girl: Billy’s own marriage is on the rocks. And director Gaz Alazraki (whose feature We Are the Nobles was a record-breaking hit in his native Mexico) ups the oomph with the Miami setting and a soundtrack of classic cuts by the likes of Celia Cruz and Benny Moré, as well as an onscreen performance by rapper Ozuna and a jazz-inflected score by the great Terence Blanchard. The celebratory mood in the closing-credits sequence looks like actual fun, for characters and cast alike, ending this trip down the aisle on the upbeat and keeping the schmaltz to a minimum.

As the story opens, the business-focused Billy and his fed-up wife, Ingrid (Gloria Estefan), are about to tell their girls that they’re divorcing — the split being her idea, not his. But when older daughter Sofia (Adria Arjona, of Morbius and Irma Vep), a newly minted attorney, arrives from New York with news that she’s engaged, they put their announcement on hold so as not to cast a pall over the wedding plans, and pretend that everything is the same as it ever was. Cue Billy’s bedtime retreat to the couch in his office, pillows in hand.

And cue the wedding planner. When Martin Short left over-the-top quaking in the dust with his extravagant turn as Franck in the 1991 version, the term was “wedding coordinator,” deceptively suggesting a more collaborative approach to the nuptials. Whatever you call them, if wedding planners in real life are as insane and endlessly insulting as their movie counterparts, wouldn’t there be far more elopements?

Here it’s Saturday Night Live’s Chloe Fineman who’s called upon to overplay, and also to torture the Spanish language, both of which she does with gusto. Her Natalie Vance is, like Franck, a sketch-character bull in a china shop of human beings. It’s a strained bit of shtick, but at least in this go-round we’re not made to watch smart people eagerly buy into the snobby insults without batting an eye. In a nice touch, Sofia’s younger sister, the spunky and artistic Cora (Isabela Merced), grabs a bowl of popcorn, the better to enjoy the back-and-forth between clueless Natalie and the Herreras as they try to contain their disbelief. As to why there’s no time to search for someone more trustworthy, the screenplay offers a handy reason: There’s a tight deadline for the wedding because Sofia and her fiancé, fellow attorney Adan (Diego Boneta), will soon begin working for a nonprofit in his native Mexico.

There’s a stiffness to the early going as Alazraki lays out the sitcom setup. It’s Garcia’s dry delivery, and the notes of tension between Billy and Ingrid, that cut through the flat efficiency. Things gradually loosen up, especially after Billy and Ingrid meet the in-laws. Adan’s father, Hernan Castillo (Pedro Damián), is a hail-fellow-well-met gazillionaire, a brewery magnate who swoops into Miami accompanied by Adan’s mother (Laura Harring), his young, second wife (Macarena Achaga) and their infant child, impressing Ingrid with how grown-up they all are about the situation.

In earlier tellings of this story, the mother of the bride was little more than a calm counterweight to her husband’s dramatics. Though that’s still her chief function here, the screenplay gives her a backstory, however slight, and Estefan convincingly balances the character’s natural warmth and the cold wall she’s put up against Billy to protect herself from further disappointment.

A brief, first-rate scene finds the Cuban Herreras and the Mexican Castillos speaking Spanish, and something comes alive in the characters and the actors that makes you wish there were more such exchanges. Most of the best lines in the movie go to Garcia, who makes them sing. The way Billy spits out his initial impression of Adan, with “his fake bohemian vegetarian soft voice” is a laugh-out-loud delight. His slow-burn skeptical reactions are funny too, especially compared with the film’s broad-strokes swipes at humor, and so are the unspoken thoughts you can imagine when he’s trying to keep his exasperation in check.

The camerawork by Igor Jadue-Lillo is strongest in its glances at the waterfront glitter of Miami and in the closing section, when nature cancels the two families’ best-laid plans and everyone, even the wedding planner, shifts into high-gear improvisation to save the big day. At an earlier celebration, the “intimate” engagement party that the ostentatious Hernan throws on his yacht, the DP captures an odd image: Billy stands by himself on the ship’s deck and the wind steals his hat. Alazraki lets the moment play out for precisely the right length of time, and Garcia’s response is perfect. Billy may be stubbornly old-school, but he’s learning to go with the flow.