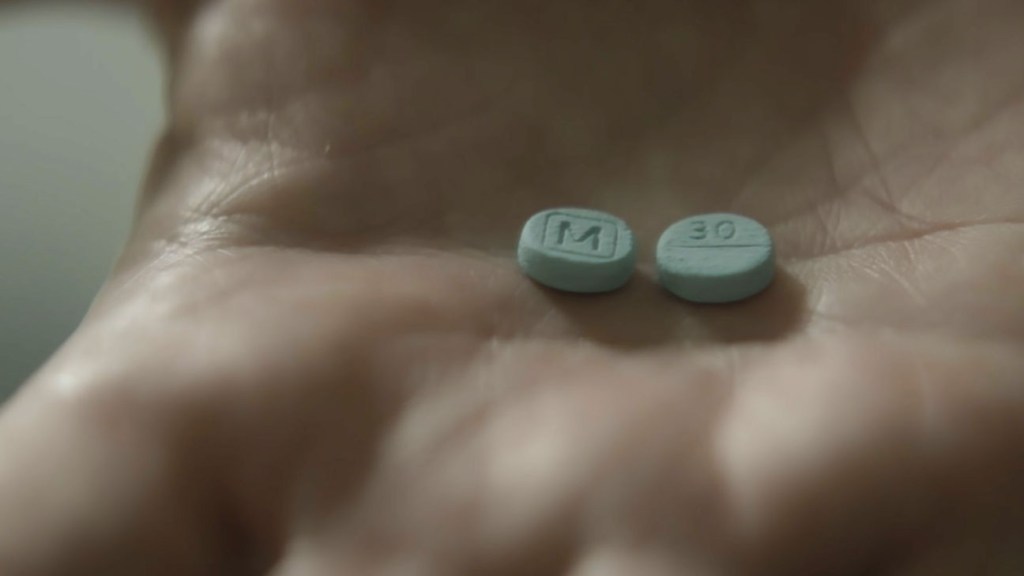 Attention, readers: Do you suffer from Rage Deficit Disorder? Do you have difficulty maintining a level of anger proportionate to the horrors afflicting this world? We prescribe Darren Foster’s pill-mill doc American Pain, a film that is difficult to discuss using civil language, filled with some of the most hateful Americans not currently involved in politics or technology. Caution: Do not watch on a full stomach or before driving, and have something very comforting planned for after the screening.

Foster’s film profiles twin brothers Chris and Jeff George, the redneck counterparts to the Sacklers and others who made fortunes off the opioid crisis. Imagine ‘roided up, racist Florida jackasses, and it’s their faces you’ll see. If someone you care about overdosed in the ’00s, odds aren’t bad the drugs in question passed through one of their sham pain clinics. In the even-tempered words of one of the federal agents interviewed here, they ran “the largest street-level group operating in the entire United States.”

Cue some shocking time-lapse surveillance footage of one of the brothers’ pill mills, where the crowd of addicts waiting to get in looks like ants swarming a sugar cube. Corrupt doctors carrying handguns under their coats; MRI units operating behind strip clubs; trashbags full of cash. If the operation weren’t ruining so many lives, you might call it colorful. But despite his brisk pace and pulpy material, Foster is too conscientious to make the Georges’ story entertaining.

Much of the boys’ backstory here comes in an interview with their father, John Paul George. (Somewhere, Ringo Starr is thanking Heaven he’s not associated with this jerk.) A homebuilder who got rich building tacky-looking residences, he raised little terrors: We see a shocking montage of mug shots and misdemeanor charges from their youths, nearly none of which resulted in any serious consequences. Everything we hear suggests that Daddy taught them that’s the way it should be: You’re smart, cops are dumb, do what you want and screw everyone else. He may not say it outright, but as he talks about his twin felons, it’s hard not to see the pride he takes in the scale of their criminal achievement.

Hockey goons who had long appreciated easy access to steroids, the brothers founded South Beach Rejuvenation, which operated like “telemedicine for steroids.” Then they met a doctor who opened their eyes to the pain-clinic business: Especially in Florida, which had no database tracking prescriptions of this sort (and, apparently, would let almost literally anyone sell the drugs), clinics trading in painkillers were a gold mine for unscrupulous operators. That doctor died a few weeks after the Georges went into business with him, which was convenient: Now they could hire doctors on commission, keeping far more of the money.

Jeff and Chris both speak freely to Foster in interviews conducted via phone from prison, sounding startlingly unremorseful. Chris refers to himself as a pioneer of his industry; Jeff brags that he’s the creative one, making Chris a mere workaholic. Foster gets many of their co-conspirators on camera, all of them speaking much more cheerfully than seems decent. There’s the buddy who functioned as something of a bouncer in the waiting room, shouting at addicts that they’d better not snort or shoot up in the parking lot after filling their prescriptions. (But boy, did they.) There’s the family of dealers from Kentucky, looking like casting rejects from Justified (“sorry, ma’am, your look is a little on-the-nose”), who were among the very many people who routinely drove a dozen hours down to the Georges’ clinics, stocked up, and drove home to sell three-dollar pills for $20 each. There’s a stripper wife, a perhaps-rueful stepfather, and a retired DEA investigator, Louis Fisher, who somehow has convinced himself that working for these guys wasn’t a monumental crime.

Then there are the good guys: local news reporters, concerned neighbors, and law-enforcement agents who come across as the kind of straight arrows Americans have too little experience with these days. They flesh out a very compelling narrative about the Georges’ rise and fall. Presumably, they’re responsible for the mountain of incriminating recordings we hear: phone calls in which the brothers and their henchpeople remove all doubt that they understood how these drugs were being abused and that they couldn’t have cared less. When one carload of patients left the clinic, got high and were killed trying to cross tracks in front of a train, these men actually laughed that they’d be so stupid. And they did it on a tapped phone, like the morons they are.

Foster’s research and storytelling are very satisfying, even if the results aren’t. Many of those involved wound up serving prison time, but of course it was far too short, too gentle and not served in the same cells as the Big Pharma execs who made this horror story possible. Chris George is already out — welcomed home on camera by his new girlfriend, grinning as he talks about the new business ventures he has planned. He tells Foster he did nothing wrong: Drug addicts were responsible for their own choices, he says. Somewhere out there, a Republican strategist is wondering if he can get this guy on a ballot by November. It’s Florida, so the answer is probably yes.

2022-06-12
Previous Post: Roddy Ricch Arrested on Gun Charges While on His Way to Play Gov Ball
Next Post: Watch Alicia Keys Bring Out Johnny Marr to Cover the Smiths’ ‘This Charming Man’