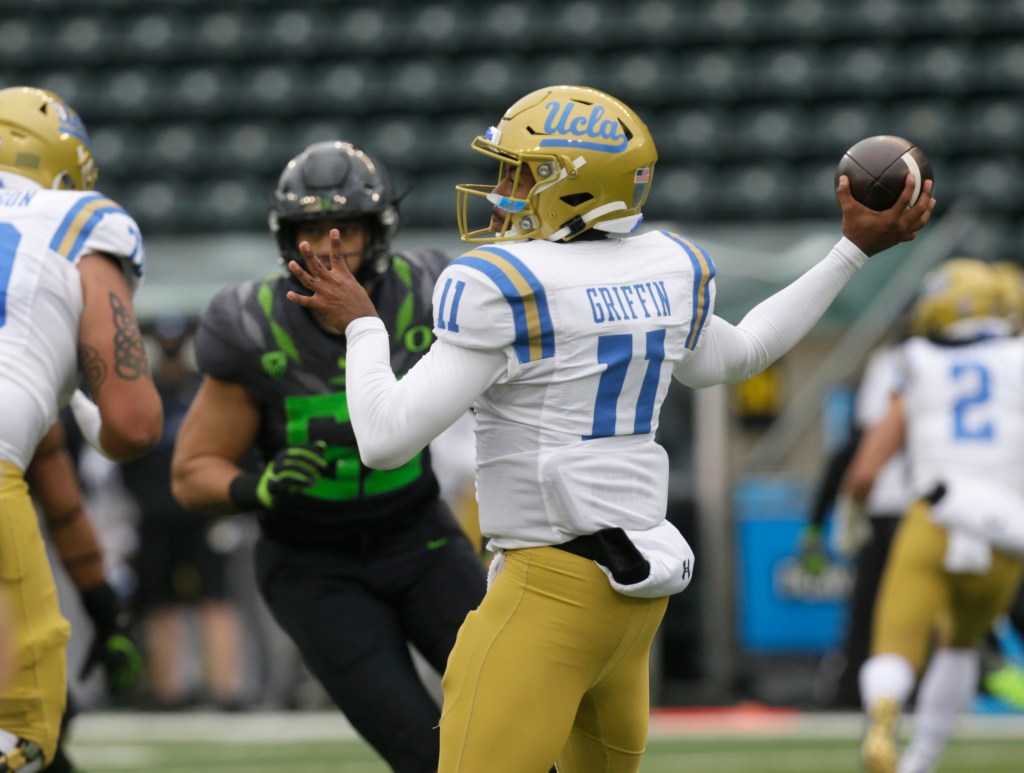 Is it possible that the grand L.A. tradition of a quarterback controversy might be roiling UCLA’s fan base this week?

Probably not, to be honest. The Bruins’ results over the last few years haven’t lent themselves to the sort of fan passion required for that sort of controversy. And the backup, Chase Griffin, didn’t win Saturday, though he and his teammates hung in quite a bit longer than anticipated against No. 11 Oregon in Eugene.

Moral victories don’t count. But the Bruins did frighten Oregon, in a 38-35 loss in Autzen Stadium, and they very well may have spoiled any longshot hope the Ducks and their fans might have had of a berth in the College Football Playoff, hanging in there to the end and denying Oregon the type of style points it would probably need to make up for the Pac-12’s (a) diminished national profile and (b) shortened 2020 schedule.

UCLA’s coaches and players also learned a lot about what they have in Griffin, a redshirt freshman who was thrust into the starter’s role against the Ducks when junior Dorian Thompson-Robinson was scratched because of COVID contact tracing issues. He did not embarrass himself at all in his first college start.

Griffin, who was born in Santa Monica – UCLA Santa Monica Hospital, to be precise – but grew up in Round Rock, Texas, won the competition to be the backup quarterback in the weeks leading up to this season, and he got the word late in the week to be ready. So he went into a tough place to play – though less tough with no fans than it would be with a full house – and hit 12 of his first 14 pass attempts, brought the Bruins back from an early 14-0 deficit and kept them within striking distance to the end while completing 19 of 31 passes for 195 yards and a touchdown, complementing Demetric Felton’s 176 rushing yards and two scores.

“Chase is a gamer,” Felton said in the postgame video conference. “He’s really cool, calm and collected. So, you know, nothing really changed for me. And, you know, I trusted him and I know he’s going to do his best. So I’m extremely proud of him and just ready to see what’s next for him.”

There were rough spots for the rookie, two interceptions and a lost fumble, although the pick-six at the end of the first half that Jordan Happle returned 58 yards for an Oregon touchdown was sort of a fluky play. On third-and-6 play from his own 44, at the end of the half with the Bruins’ holding an unexpected 21-17 lead, Griffin was attempting a Hail Mary heave to the end zone for a tip or a lucky bounce, but he was hit as he threw and the ball popped straight up and fell into Happle’s arms.

The play gave the Ducks a 24-21 halftime edge, and the Bruins would never lead again.

“I know in Pac-12 games you need as many points as you can (get),” coach Chip Kelly said. “Not Chase’s fault. He was trying to do everything he could.”

Twice in the second half Oregon went up by 10, twice Griffin brought the Bruins back within a field goal, and he and his offense got the ball back with 1:17 to play, reached the Oregon 39 thanks to a roughing the passer penalty, but couldn’t quite pull it off.

Griffin did answer one question right away.

“Everybody wants an opportunity,” Kelly said. “And when you get an opportunity, are you ready? And I thought Chase did a heck of a job today. … Chase had never played, so no one really knew what you were going to get. But I was really proud of what he did today.”

So was Thompson-Robinson, who tweeted his support during the game and concluded with, “So proud of this team! Even more proud of @ChaseQB11 and this offense! #GoBruins.”

So proud of this team! Even more proud of @ChaseQB11 and this offense! #GoBruins

“Dorian has been great all week,” Griffin said. “He prepares hard every week. And earlier in the week, we were preparing as if he would be the starter. When we found out that he wasn’t, he sent me a couple of messages, you know, keeping my spirit right, keeping my mind right, giving me some helpful advice.

“And I’m very grateful for the entire quarterback room. I think we showed up today. I can, of course, be better and we’ll go from there.”

No, there likely won’t be a quarterback controversy in Westwood, at least for now. When Thompson-Robinson is cleared to play, he’ll play. He’s a junior, he’s the incumbent, and he hasn’t really done anything to lose the job. But Saturday was an indication that (a) the Bruins can trust Griffin, and (b) there could be a bright future there.

But did this experience help position Griffin for future success, or at least give him a template off of which to work? Don’t ask.

“I’m not really focused on that,” he said. “We’ve got a game next week. We got film review tomorrow and stretch. And I’m going to make sure that after this plane ride home, we wake up in the morning, be ready to prepare ourselves for the next week, put this game to bed, and that’s as far as my scope really is reaching right now.”

He doesn’t have to think about what it did for his future, but his coaches almost certainly have. Saturday may have been a loss for the Bruins, but it was a more productive trip than most of us expected.

2020-11-21
Previous Post: College Football Playoff Picture after Week 12: Four in and four out ahead of first rankings
Next Post: AC/DC Flick the Switch on Power Up