Alexander: In this Rams’ triumph, it was Darious Williams’ day 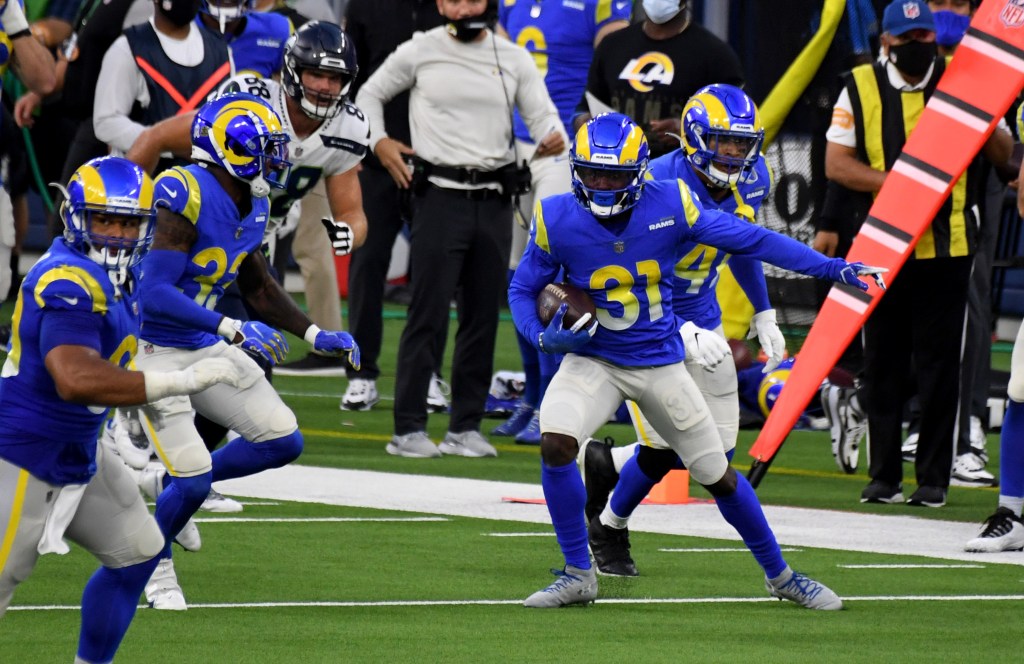 The talk all week before the Rams were to face the Seattle Seahawks was about the mano-a-mano matchup between Rams cornerback Jalen Ramsey and Seattle wide receiver DK Metcalf, who came into Sunday leading the NFC in receiving yards (788) and sharing the conference lead in touchdowns (eight), as part of the NFL’s best pass offense (298.1) through eight games.

Now it can be told. Yeah, Ramsey was going to, and did, shadow Metcalf, who was uncharacteristically quiet – two catches against zone coverage and just four passes thrown in his direction all afternoon – in the Rams’ 23-16 victory Sunday. But, Ramsey said, he wanted to make sure some other guys got the attention they merited.

“I really, really don’t want to make it about me in that matchup,” he said. “I told you, ‘Yeah, I ain’t gonna shadow him, I’m gonna cover everybody,’ because I wanted to downplay it just because I knew what everybody else in the secondary has put in. I knew what they put in this whole week and how they prepared. And I knew they were going to get (their) opportunity to shine as well.

“And I feel like that every week a little bit. I really take pride in shutting down my responsibility, whether that’s my receiver or my whole side of the field, and opening up opportunities for those guys to shine and get the recognition that they deserve because I see what they do every day at practice week in and week out.”

The main beneficiary was Darious Williams, a third-year pro from Alabama-Birmingham who may have had the game of his life Sunday – and he didn’t even start.

Williams had a pick-six wiped off the board toward the end of the first quarter. He intercepted a pass intended for David Moore at the Seattle 41 and took it to the end zone, but a defensive holding penalty on Leonard Floyd wiped it out.

But toward the end of the first half, two plays after Jared Goff had fumbled the ball away deep in his own territory, Williams got it back by intercepting Wilson’s pass intended for tight end Will Dissly in the corner of the end zone. He added a second pick midway through the fourth quarter, jumping Greg Olsen’s route at the Rams’ 36 and returning the interception to the Seattle 45. And late in the game, with the Seahawks desperately trying to catch up, Williams batted away a Wilson pass for Tyler Lockett in the end zone, one of three passes he broke up.

Under the COVID protocols, four players came out for Zoom interview sessions after the game and Williams wasn’t one of them. But that’s all right. He had a three-time Pro Bowl cornerback as his spokesman.

“He got his opportunity to shine today,” Ramsey said. “Cool. They don’t want to get me a lot? Y’all want to go back the opposite way and target D-Will, he’s gonna make you pay. Two picks, PBUs, I mean he had a great game. …  I think it’s time to start talking about D-Will in this league as a household name, as a guy who can potentially be an All-Pro, as a guy who should be a Pro Bowler, you know what I mean? He’s that type of guy. And yeah, I think he seized his opportunity, that he balled today.

“As DBs, we like to kind of count even the picks that don’t count,” he added. “So I give him three today. And I don’t know how many that is for the year.”

Officially, four. If the DBs want to add a fifth one among themselves, well, it’ll be our secret.

Williams was a waiver wire pickup by the Rams in 2018 after signing with Baltimore as an undrafted free agent that spring. He played once for the Rams that season, in the regular-season finale against the 49ers, and made 12 appearances in 2019 at cornerback and on special teams. He started twice last year and had two picks, and had four starts earlier this season but was behind Troy Hill on the depth chart when the day began Sunday.

The secondary was part of a defense that made a statement Sunday against what had been a high-powered offense, one that had averaged 34.3 points and 415 yards a game. The Rams held Wilson without a touchdown pass, which was something of a bookend. The last time anyone had done so? Last Dec. 8 at the Coliseum, in the Rams’ 23-12 victory. In the 14 games in between, 12 regular season and two in the playoffs, Wilson had 35 TD passes.

Seattle finished with 333 yards Sunday and only made it to 20 points on Jason Myers’ 39-yard field goal with 25 seconds left, Pete Carroll’s idea being to take the three points and try to recover the onside kick (they didn’t).

Wilson fumbled a bad snap from backup center Kyle Fuller in addition to the two picks and was sacked six times, three by Floyd, two by Terrell Lewis and one by Michael Brockers. Again, it was a case of a defensive superstar (Aaron Donald) occupying enough attention to create space for others.

“Just our defense as a whole, I mean, you just can’t say enough about what they’ve consistently done, doing it against an offense that’s arguably producing at the highest level in the league right now,” head coach Sean McVay said. ” … But our defense has been stout all year.”

Sometimes it’s the quiet guys who cause the damage.

“The great thing about this secondary is, nobody’s ever satisfied,” Ramsey said. So we’re going to go in there this week and we’re going to strive to be better, and that’s what I love.”