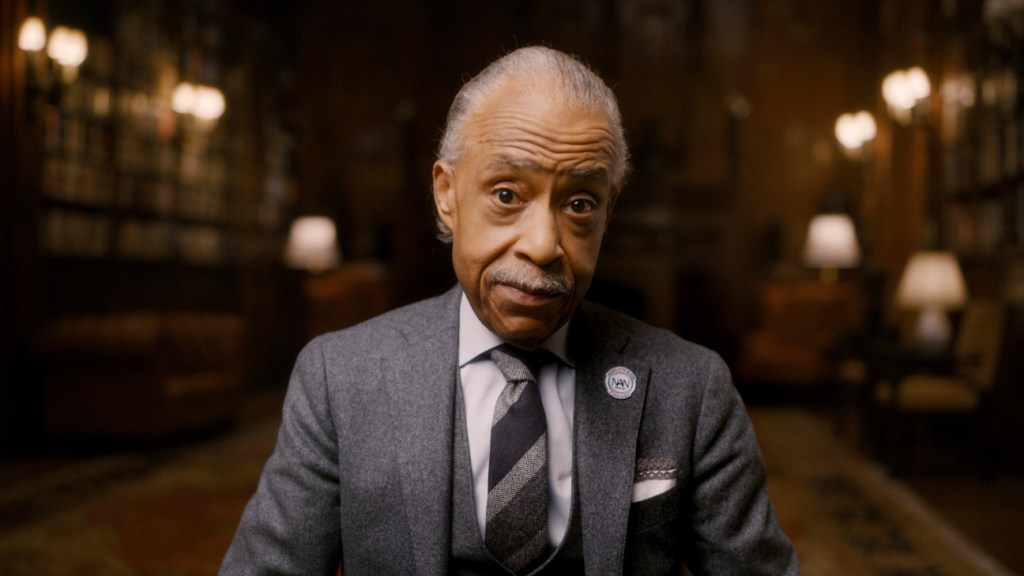 A handful of recent documentaries have got me thinking about biographies — their intentions, their function, their quality.

Loudmouth, a hagiographic portrait of the Rev. Al Sharpton, is one of them. Closing out the Tribeca Film Festival, the dutiful film charts the civil rights leader’s life from his early days as a teenage preacher up until his eulogy at George Floyd’s funeral in 2020. The film positions itself as a testament to Sharpton’s rousing oratory skills and a reminder of his fractious legacy. Sharpton — who today parties with self-satisfied liberals and hosts an MSNBC talk show — was not always respected. His no-holds-barred protest methods made him unpopular, abhorrent even, to many white Americans.

The Bottom Line Raises more questions than it answers.

A sense of admiration and responsibility courses through the doc, an orientation that eventually curdles the narrative. Sharpton has courted much controversy throughout his career. A film as committed to taking the public figure’s life and work seriously and contextualizing it within contemporary movements need not be so reticent in engaging with those parts of Sharpton’s story. That type of caution leaves gaps and raises many still unanswered questions about how the fiery preacher’s image changed so dramatically.

Director Josh Alexander opens the film with a montage of interviews with Sharpton over the years, where talk show hosts introduce the young activist to their audiences by listing the names he’s been called: troublemaker, charlatan, one-person civil rights movement, media manipulator, rabble rouser, loudmouth. Cut to a present-day interview with Sharpton, staring defiantly into the camera: “The question that I always get from whites: Rev. Al why do you always make everything about race?” he starts. “The Black question is just as troubling: Why are you doing that? Ain’t nothing going to change.”

This introduction sets up Sharpton as a person fighting doubt and suspicion from all sides. There’s a brief sequence of interviews that serve as acknowledgments of criticism of Sharpton’s wealth and accusations that he is more a businessman than a leader. Similar claims were made about civil lawyer Ben Crump, the subject of another Tribeca documentary. Like Civil, Loudmouth frames these assertions as secondary to the work. The doc uses them to segue into another one of its key themes: narrative framing. Loudmouth’s opening seconds include a title card with a quote from Haitian anthropologist Michel-Rolph Trouillot: “History means both the facts of the matter and a narrative of those facts, both ‘what happened’ and ‘that which is said to have happened.’” It’s a nod to Loudmouth’s corrective intentions.

Loudmouth begins with the 1986 murder of Michael Griffith, a 23-year-old Black man whose car broke down one December morning in Howard Beach. While trying to find help, the young man and his friends were accosted first by a mob of white residents and then later beaten by a gang of white men. Griffith was hit by a car while trying to escape. The case shook the city and Sharpton, who was 32 years-old at the time, organized and led several protests. This was a critical moment in Sharpton’s career: He called for then Gov. Mario Cuomo to appoint an independent prosecutor to investigate the case. That attorney would later find the accused white men guilty. For Sharpton and his comrades, this was simply the beginning.

Loudmouth, like other documentaries of its kind, operates with a vague notion of justice. What does justice look like in America, a nation built on oppression? For Sharpton, justice initially meant the safety and protection of Black people. The cases on which he served as an advisor were about helping aggrieved families find some solace within the system and then fighting to dismantle it all together. Today, Sharpton’s goals are less clear. In the doc he reaffirms his commitment to racial justice and the safety of Black people, but he has also gone on the record pushing back on the defund the police movement. It’s a strange stance considering the disproportionate harm police cause Black people and their communities.

For its two-hour run, Loudmouth alternates between Sharpton’s past as an organizer and his present-day jobs as a commentator and advisor. These broad timelines are supplemented by brief dips into Sharpton’s upbringing: The preacher was born and raised in New York. When he was a child, his father left his mother to start a family with Sharpton’s older half-sister, who was 18 years-old at the time. The incident left him more shaken than he initially wanted to acknowledge. Throughout the documentary, Sharpton credits his mother for setting him on the right path, for sensing his desire for a father figure and helping him find models like his church pastor Bishop Washington, Rev. Jesse Jackson and James Brown. Sharpton was actually Brown’s tour manager for nearly 10 years.

At one point in Loudmouth, we see a young Sharpton presenting an award to Brown and praising the singer and his music. These are the moments when Loudmouth is a goldmine. Alexander doesn’t tamper too much with the archival material — he lets entire scenes play out. The documentary is a trove of rarely, if never before, seen footage. There’s an eerie quality to these clips, too, as they show an unfiltered view of racism in America. It’s a reminder of the thin line between past and present battles.