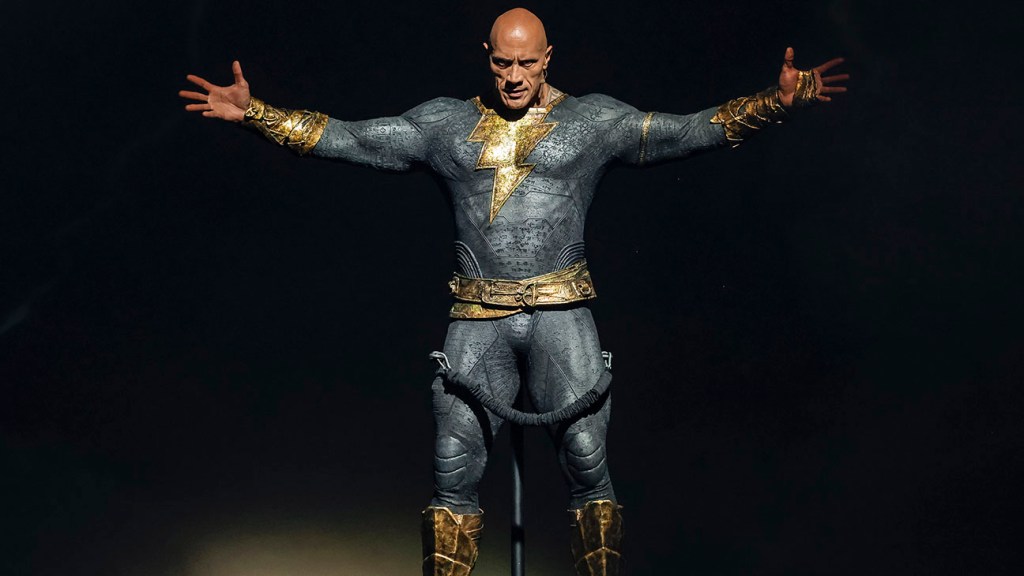 Just a year ago, there were fears that San Diego Comic-Con would never regain its relevancy after being shut down by the coronavirus. Would studios still see the value in spending millions for a convention presence in an era in which cons had migrated online? Those worries were assuaged over the weekend, with an event that showed Comic-Con was back — even if the crowds felt slightly smaller and COVID-19 masks outnumbered Spider-Man masks.

Talent and execs who brought projects to San Diego note there is still value in engaging with fans in person, not just behind screens.

In his first appearance in eight years, Dwayne Johnson electrified the crowd by soaring above the stage in costume as Black Adam Saturday as part of Warner Bros.’ panel. The DC star and his team were picked up at 4 a.m. that morning for an airport run so Johnson could arrive for rehearsal. “To get DJ in front of a crowd, that’s his bread and butter,” notes Black Adam Hiram Garcia of a panel that took weeks to plan.

Amazon spent big on Lord of the Rings: The Rings of Power, which takes place thousands of years before Peter Jackson’s films. Says Sue Kroll of Kroll and Co., who oversees marketing for the series, which launches Sept. 2: “We know that we have to earn the right to have fans engage with us, and Comic-Con was our first real opportunity to show fans our dedication to not only authenticity but dramatic and emotional storytelling.”

Comic books, of course, were also in San Diego in a big way, with Spawn creator Todd McFarlane making a surprise appearance at the end of a DC-focused panel to announce a Spawn/Batman team-up book he’s working on with artist Greg Capullo. “For our audience, we only have to say four words. Batman. Spawn. Capullo. McFarlane. That’s going to be 90 percent of the sales there,” notes McFarlane of what was a mic-drop moment when he and his longtime collaborator walked out onstage to announce the project.

Below, The Hollywood Reporter breaks down the most noteworthy panels (including some moments that may not have hit the mark.)

LORD OF THE RINGS: THE RINGS OF POWER: The most expensive TV show of all time was all over the Con, with Tolkien enthusiast Stephen Colbert emceeing a Hall H panel that featured series composer Bear McCreary leading a full orchestra, a new trailer and five scenes from the series. You literally couldn’t escape LOTR, with the Amazon Prime series taking over the entryway attendees use to scan their badges.

DUNGEONS & DRAGONS: HONOR AMONG THIEVES Heartthrobs of today such as Chris Pine and Regé-Jean Page may have been a draw, but the real star of the show was former rom-com king Hugh Grant, who in his first Con appearance charmed the crowd by playing the fish out of water. In a year packed with fantasy, the Paramount film stood out for its Monty Python-esque humor rather than taking the genre too seriously.

WARNER BROS. The first trailer for Shazam! Fury of the Gods brought back the youthful fun of the first, while Johnson floated (in costume) above the stage, lording over the crowd of 6,500. Still, the absence of Aquaman and the Lost Kingdom and The Flash were sorely felt in a year in which Marvel ran circles around the Distinguished Competition in terms of sheer volume of projects it brought.

STAR TREK Paramount+ took a victory lap for the recently wrapped Strange New Worlds with jokes about those Anson Mount hair memes, while Sir Patrick Stewart shared the first look at his Next Generation castmates back for Picard’s third and final season. The British actor has spent years coming to Comic-Con for Trek and X-Men, and suggested this year could be his last with Picard‘s end. So he took a moment to give a warmly received thanks to the convention, noting he might not have the opportunity to do so in the future.

TEEN WOLF The MTV film generated a jolt at the end of its panel with the reveal that Sarah Michelle Gellar had been cast in a spinoff series for Paramount+. Yet it was hard to overcome some of the issues facing the film, such as actor Arden Cho’s previous pay complaint, or the fact that the franchise’s biggest name — Dylan O’Brien — is nowhere to be seen.

WALKING DEAD In 2019, AMC used Comic-Con to announce that its trio of Andrew Lincoln-starring films would get theatrical releases via Universal. This year, it revealed the long-awaited movies are now a limited series on AMC. While fellow Con favorite Danai Gurira will star, the panel left audiences wondering: How much interest does the once-powerhouse series still hold?

A version of this story appeared in the July 27 issue of The Hollywood Reporter magazine. Click here to subscribe.

2022-07-27
Previous Post: Why the long-running King’s Hawaiian restaurant is a beloved South Bay family favorite
Next Post: Mothica’s Nocturnal helped her through the darkest period of life