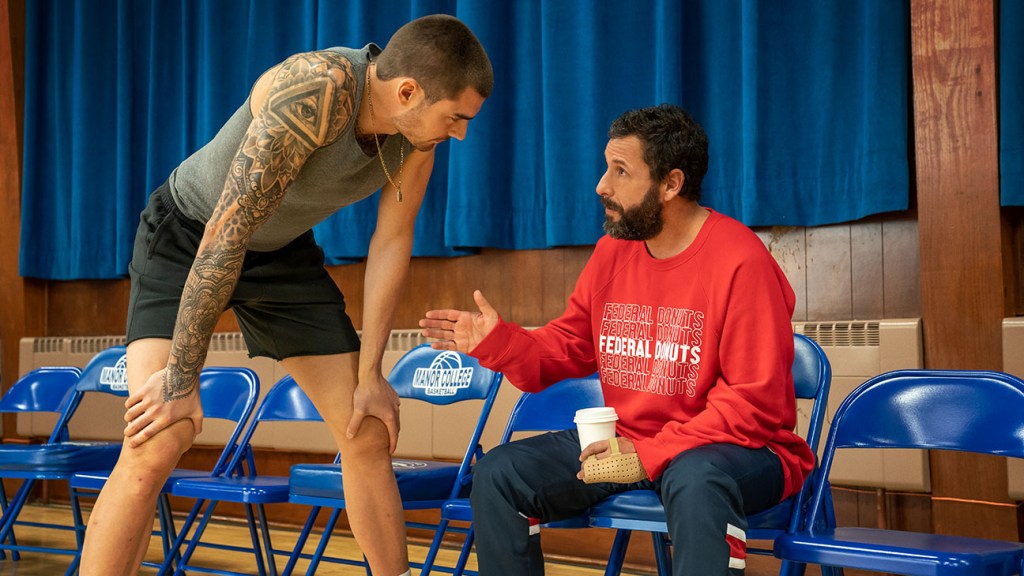 Adam Sandler so seldom steps far outside his man-child comedy comfort zone that his more dramatic outings, notably Punch-Drunk Love and Uncut Gems, are uniquely rewarding. The same goes for the rare comedy in which the actor’s shtick is contained, channeled into a nuanced characterization, like Noah Baumbach’s The Meyerowitz Stories (New and Selected). There’s pleasure and poignancy watching Sandler in Hustle as basketball scout Stanley Sugarman, a man whose infectious passion for the sport keeps hitting a wall of defeat. Adhering to the formulaic requirements of inspirational sports dramas while supplying plenty of individuality and characters worth rooting for, the Netflix feature scores.

At first glance, this seems like a job for hire for emerging director Jeremiah Zagar, who moved from documentary into narrative features with We the Animals, one of the discoveries of Sundance 2018. That film was lyrical and impressionistic, drawing comparisons to Terrence Malick in its evocation of a troubled childhood in the blazing heat of a rural landscape.

Hustle is more yoked to the nuts and bolts of conventional storytelling, but Zagar and cinematographer Zak Mulligan’s tactile ability to capture bodies in motion again yields its own kind of visual poetry here, and the director’s warm observation of family dynamics infuses heart into what’s fundamentally a drama of two men looking to overcome bad luck and secure their redemption arcs.

The fanatical devotion to basketball of Sandler — a producer here, alongside LeBron James — breathes affectionate life into a film stacked with cameos from celebrated NBA stars, coaches and streetball heroes. It’s a love letter to the sport but also to Philadelphia, its music and its feverish culture of sports fandom, evidenced in atmospheric shots of murals around the city depicting basketball legends. But whether or not you’re a basketball aficionado, the sturdy script by Taylor Materne (a writer on NBA videogames) and Will Fetters (Bradley Cooper’s A Star is Born remake) pulls you into the underdog story on a human level.

Tired of nonstop travel and being away from his wife Teresa (Queen Latifah) and their teenage daughter Alex (Jordan Hull), Stanley finally gets his wish when his longtime boss, Philadelphia 76ers owner Rex Merrick (Robert Duvall), moves him from scout to assistant coach.

But Rex’s sudden death puts his aggressive son Vince (Ben Foster) in charge of the business, nudging his savvier and more level-headed sister Kat (Heidi Gardner) out of the leadership decisions. That leaves Stanley not only without an ally, but working for a hothead with whom he has repeatedly clashed. Eager to find the missing piece that will push the 76ers to the championship, Vince nixes his dad’s directive and sends Stanley back out into the field.

That means more thankless weeks of international airports, hotels and fast food, but a bright spark illuminates the horizon when he stumbles onto a game on a street court in Mallorca, Spain. It’s dominated by a heavily tattooed giant named Bo Cruz (NBA player Juancho Hernangómez), who displays the natural ability of a star in the making. And in a field where professional scouts tend to be aware of every gifted player on the planet, 22-year-old construction worker Bo is the rarest of finds — an unknown talent with the speed, blocking skills and shooting accuracy to go all the way in the League.

The extent to which Sandler tamps down his funnyman instincts while still finding the natural humor in schlubby Stanley is exemplified in his initial attempts to make contact with Bo. This happens first on a public bus, with the imperfect aid of an English-to-Spanish translation app, and then at Bo’s home, which he shares with his mother Paola (María Botto) and young daughter Lucia (Ainhoa Pillet). Bo initially is reluctant to miss work and be away from Lucia, but when Paola hears the potential starting salary of $900,000, she insists he fly to Philly with Stanley and try out for the 76ers.

The screenwriting rules of the sports drama require obstacles, and those come mainly via Vince, who dismisses Stanley’s find due to his lack of team experience. There’s also a past legal transgression that suggests the Spanish discovery might be prone to violence, a problem that later seems confirmed when he responds to the baiting of cocky player Kermit Wilts (Anthony Edwards) during a showcase game. But Stanley’s belief in Bo, and his weariness with Vince’s arrogance and inflexibility, prompt him to quit his job and bankroll the young player’s training himself, alarming Teresa.

The script refrains from having Bo jog up the steps of the Philadelphia Museum of Art, but in many other ways the early morning workouts nod back to Rocky and to the tried-and-true tradition in sports movies of the rough-diamond newcomer going up against the pros.

These scenes work also because of the emergence of a genuine friendship and mutual respect between Stanley and Bo, two men who share a desire for sporting excellence but also to do right by their families. While neither of them is shy about his achievements, both men are fundamentally decent guys, with enough humility and awareness of their flaws to make them good company for the movie’s well-paced two hours.

Zagar (a South Philly native) and Mulligan capture the action of the sport in all its vigorous excitement, pumping up the energy with fast cutting from editors Tom Costain, Brian M. Robinson and Keiko Deguchi to match the fancy footwork. There’s also nifty use of social media when Stanley builds up Bo’s reputation via streetball challenges after Vince has publicly discredited him, with amateur video turning him into a YouTube sensation. The use of Spanish pop and hip-hop, including a number of Philly musicians, keeps these scenes humming, folded in with Dan Deacon’s effective electronic score.

There are places where Hustle veers into cliché — some of the boilerplate pep-talk dialogue, a miraculous last chance timed right after a disheartened airport farewell. But there’s a depth of feeling and a disarming sincerity to the movie that keeps you watching. Even the inevitable triumph seems refreshingly understated.

The director showed his skill at coaxing performances with complex shading out of the nonprofessional actors playing the three preteen boys in We the Animals, and he gets creditable work here from Hernangómez, immensely likable and magnetic in his first screen role. His former Minnesota Timberwolves teammate Edwards is also convincing as Bo’s chief antagonist, while NBA player-turned-sports commentator Kenny Smith looks similarly at ease in front of the camera as Leon Rich, a sports agent whose loyalty to Stanley goes back to their college basketball days.

On the pro side, it’s nice to be reminded of elder statesman Duvall’s flinty intelligence, albeit in just a couple brief scenes, and Foster plays the bull-headed smugness of nepotism without tipping over into Don Jr. caricature. Queen Latifah brings her usual relaxed glow with a no-BS edge, making the standard supportive wife role an agreeable presence, and Hull is appealing as the daughter aiming to go to film school. A scene where Stanley and Bo’s families meet over dinner is lovely, and Alex quietly swooning over the handsome Spaniard is a cute touch.

This is clearly Sandler’s film, and he makes Stanley a mensch, even when he’s screaming into the phone about what he’s owed after the 30 years he’s given the League. The performance is elevated by the actor’s love of basketball, which explains the welcome lack of showboating as he tones down his signature comic tics and puts them into the service of character and story, not of a star turn. He makes Hustle sweet and satisfying.