11 most underrated nü-metal bands that shaped a generation 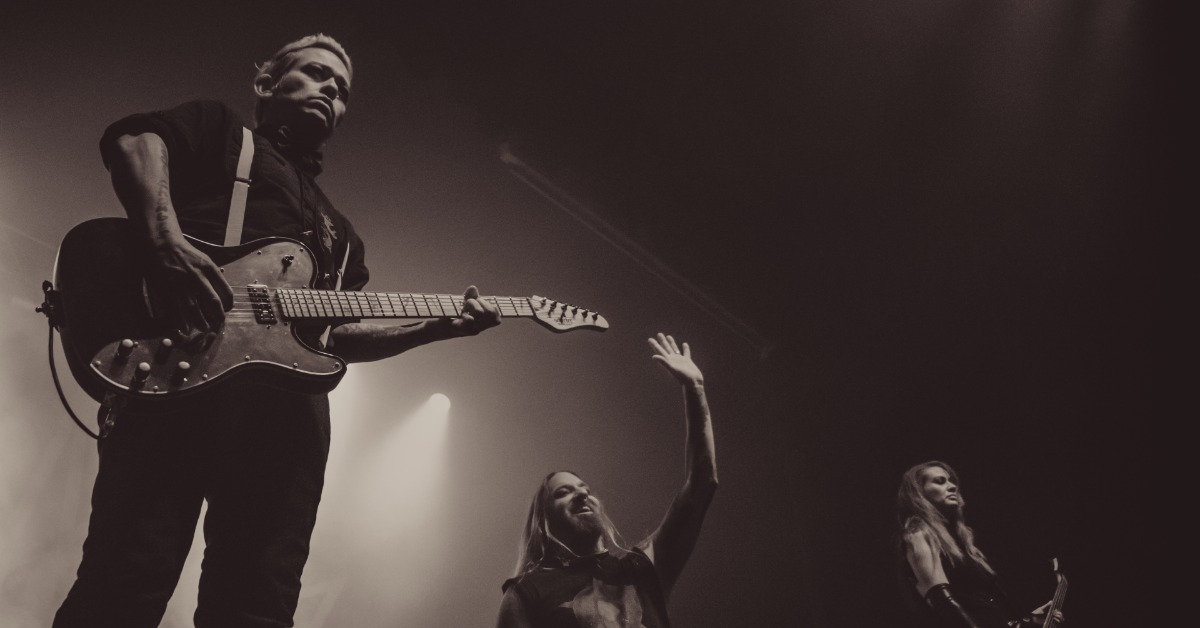 In recent years, it has become impossible to ignore the resurgence of several sectors of pop culture that were deemed either irrelevant or rendered obsolete. At the start of 2020, we saw the rise of the next generation of pop-punk, emo and scene culture that has since been catapulted back to the mainstream for the first time in years. This is undoubtedly due in large part to the fresh crop of artists breathing new life into each respective phenomenon.

As we all know, pop-punk rose to mainstream popularity in the early 2000s bringing with it a thriving genre of artists penning youthful, and emotionally transparent material that was the soundtrack to first loves, first breakups and the joys of being young. However, at the same time that this genre was exploding, there was another section of music that was experiencing a major moment in pop culture: nü-metal.

Read more: What does emo really mean? The story of the genre in 11 songs

While guitar-based music was having its day in the sun, nü metal was developing through an even darker lens that incorporated heavier elements and vastly more intense subject matter. With breakthrough artists ranging from Slipknot, Korn, Limp Bizkit and Linkin Park, mainstream music had never sounded more visceral, angry and artistically unsettling. The genre was the perfect recipe for a generation unsure of what the future would hold. The lyrics captured existential dread and darker tones in ways that mainstream music wouldn’t touch on at the time.

Eventually, nü metal became oversaturated, as many genres do once the mainstream catches on and industry players rush to sign any artist who relatively fits the criteria. In many ways, nü metal became somewhat of a caricature of itself to the industry and media tastemakers. That would lead the genre to be referred to with negative connotations. By the mid-2000s, nü metal’s legacy was unfairly tainted and largely left behind with the exception of major acts.

Read more: “People like listening to me being horribly in pain”: the oral history of Korn

Thankfully, the history of nü metal doesn’t end here. The legions of fans who grew up adoring the music and the genre’s many acts have now grown up, taken their love for the genre and given it new life. Many of these fans have gone on to become the very media and industry tastemakers who would once denounce the genre, and have begun to restore the legacy and impact of this musical movement. Beyond that, many grew up and formed their own musical projects that are heavily inspired by the genre’s glory years. These modern bands are once again pushing the boundaries of heavy music to even more exciting places.

We can attribute this to a few things: nostalgia, technological advancements in recording and a genre-fluid world. In the 2020s alone, we have seen the rise of Spiritbox, Ocean Grove, Vein.Fm and Tetrarch wearing their love for nü metal on their sleeves proudly, and most definitely loudly, to monumental success. Even far more seasoned acts such as Bring Me The Horizon and Underoath have begun to incorporate nü-metal elements that have only increased their accessibility and reach ever since. That being said, there is still a stigma behind the genre’s name, but slowly, history is being rewritten.

Read more: 10 bands who are crushing all the stereotypes you’ve heard about nü metal

With a revival of nü metal on its way, we’re looking back at the genre’s most underrated bands. Chances are, you will discover some great music in the process.

Washington, D.C.’s Nothingface were truly special. The band’s early material combined the best elements of post-grunge and hardcore to form a unique blend of nü metal, but it wasn’t until their 2003 major-label debut, Skeletons, that they found their sound. The songs were chock-full of Alice in Chains-esque harmonies, pop sensibilities, politically driven messages and angular guitar riffs.

Just as the band were beginning to pick up mainstream airplay on MTV and Fuse, they disbanded and would never reunite. Guitarist Tom Maxwell would later go on to join hard-rock supergroup Hellyeah, which featured the late Vinnie Paul from Pantera and Chad Gray of nü-metal heavy hitters Mudvayne. Tragically, the band’s enigmatic frontman Matt Holt tragically passed away at the age of 39 due to a degenerative illness but has left behind an incredible collection of music that paved the way for many artists.

Kittie are hands down the most badass group on this list. Forming in 1996 when each of the band’s members ranged from 14-17 years old, Kittie exploded onto the nü-metal circuit with their signature brand of unapologetic and brutal songs. Kittie, who have consistently remained an all-female group, took on a largely male-dominated music scene and eviscerated the competition. Just watch the band perform at Ozzfest 2000 to a sea of patrons. It’s remarkable to witness a group of strong, young musicians not only outplaying their peers but sounding heavier than those who were nearly double their age at the time.

The group experienced the most mainstream attention with their debut album, Spit. However, Kittie expanded their sound to many different genres over the years. Frontwoman/guitarist Morgan Lander, along with drummer and sister Mercedes Lander, have remained as the core original members, but have reunited as recently as 2017 with several of the band’s prominent players for select shows and an incredible retrospective documentary. The reunion shows and documentary also paid tribute to the band’s late bassist Trish Doan, who tragically passed away at the age of 31 in 2017. Now in 2022, Kittie will be playing all three dates of the When We Were Young festival, their first performances in nearly five years.

Taproot were certainly not underrated in the early 2000s when the band rose to prominence, largely due to the strength of their hit single “Poem.” However, the band aren’t referenced as much as they should be as of late. Taproot’s finest material combined elements of hip-hop, rock, funk and distinct vocal deliveries. Stephen Richards’ inflections and melodies are admittedly an acquired taste for some. However, there has yet to be a vocalist who can emulate his distinct style. After a series of successful albums and radio singles, the band eventually became more niche with a small-but-dedicated fanbase. Taproot are still active to this day and are working on their long-awaited seventh studio album.

Perhaps the most underrated band on this list is none other than TRUSTcompany. In 2002, the group released their incredible debut album, The Lonely Position of Neutral. The record hit gold-selling status shortly after its release, driven by a collection of hard-hitting singles that incorporated a more alternative and shoegaze approach to nü metal. You can hear the band’s lasting influence in modern groups such as My Ticket Home and Heavenward, who have made notable contributions to the modern post-grunge revival that borrows from the roots of this era.

Cold could have easily been one of the biggest crossover acts from the nü-metal era. Propelled to mainstream stardom briefly in 2003 with their record Year of the Spider, the band saw daily airplay on MTV with the infectious single “Stupid Girl.” In case you ever wanted to see an example of a glitch in the simulation, the song was co-written by Rivers Cuomo from Weezer, and his influence and style are apparent in every note. Cold never scored another major hit after this release, but they’re now highly regarded for their diverse contributions.

New Jersey rockers Ill Niño offered a breath of fresh air to the genre. At one point, the band were a six-piece that featured a bongo player. Yes, you read that right. For a band that sold over a million copies of their records, you wouldn’t think they would be underrated. Sadly, you don’t hear enough about this band, though they’re still active, albeit with a largely augmented lineup. The band’s biggest breakthrough single was “How Can I Live,” which was chosen as the lead single for the criminally underrated horror film Freddy Vs. Jason. Haven’t heard the soundtrack to this incredibly campy and over-the-top horror film? Please drop everything you’re doing because it’s chock-full of nü-metal bangers like this.

What’s there left to say other than that Spineshank knew how to write killer songs? The Los Angeles-based band, who are also on the Freddy Vs. Jason soundtrack, penned urgent songs that had the industrial tinge of Static-X and the complex vocal melodies and arrangements of Deftones. The band were so good that “Smothered” was nominated for Best Metal Performance at the 2004 Grammy awards. The band have been largely inactive since 2012. But we should all pour one out for one of the greatest bands to do this genre justice.

Did you know that Five Finger Death Punch’s frontman Ivan Moody had a prominent and genre-defining nü-metal project before becoming a platinum-selling household name? Admittedly, it was pretty amazing. Motograter were undoubtedly the strangest yet captivating band to grace nü metal.

Motograter’s name comes from a signature instrument that they created specifically for the band, made out of industrial materials, guitar and bass strings. It was then played with drum sticks to create a visceral and percussive bass tone. Moody departed the band shortly after their debut self-titled album, but the record’s impact lives on. The band have reunited several times over the last 15 years with new lineups, which included new material in 2017. Sadly, though, we’ve never seen a proper full-scale reunion of the band.

Coal Chamber were the full package. Not only did they create a near-perfect representation of what nü metal embodied, but they had an incredible stage presence. Their artistic aesthetic carried over with every album cover, T-shirt design and music video. Led by frontman Dez Fafara, Coal Chamber possessed some of the most sinister vocals in the nü-metal circuit at the time, paired with classic down-tuned guitars and slap basslines. The band ceased operations in 2003 after releasing three records before reuniting for an album in 2015. Vocalist Fafara has gone on to front the metal band DevilDriver. He’s also found success running his own music management company with his wife, Anahstasia, called The Oracle, which represents bands such as Cradle of Filth and Jinjer.

If the city of Bakersfield, California, sounds familiar, it’s because it’s the hometown of nü-metal legends Korn. However, not only are Adema from this city just north of Los Angeles, but singer Mark Chavez is the half-brother of Korn vocalist Jonathan Davis. Fear not, Adema have their own signature sound. Their self-titled debut was certified gold and spawned several successful singles and movie placements. Adema are still active to this day with an augmented lineup that no longer features Chavez on lead vocals. Chances are, any nü-metal purist will tell you that Adema had the recipe for the genre on lock.

Sevendust are the creme de la creme of nü metal and pioneers in their own right. Consider frontman Lajon Witherspoon’s angelic vocal melodies, paired with his controlled yet chaotic inflections. There’s also guitarist Clint Lowery’s uncanny ability to write massive rock songs with guitar virtuosos hooks. Ultimately, Sevendust have remained a powerhouse with for nearly three decades. The band are a monumental success with three gold-selling records, a Grammy nomination and a massively dedicated fanbase. However, the band aren’t brought up in conversation nearly enough when the genre is historicized. Sevendust have created music that’s entirely their own, songs that can stand up against any of the genre’s major players.

2022-04-14
Previous Post: Motionless In White share “Masterpiece” ahead of ‘Scoring The End Of The World’—watch
Next Post: Frank Langella fired from Netflix’s ‘Fall of the House of Usher’ after sexual misconduct investigation